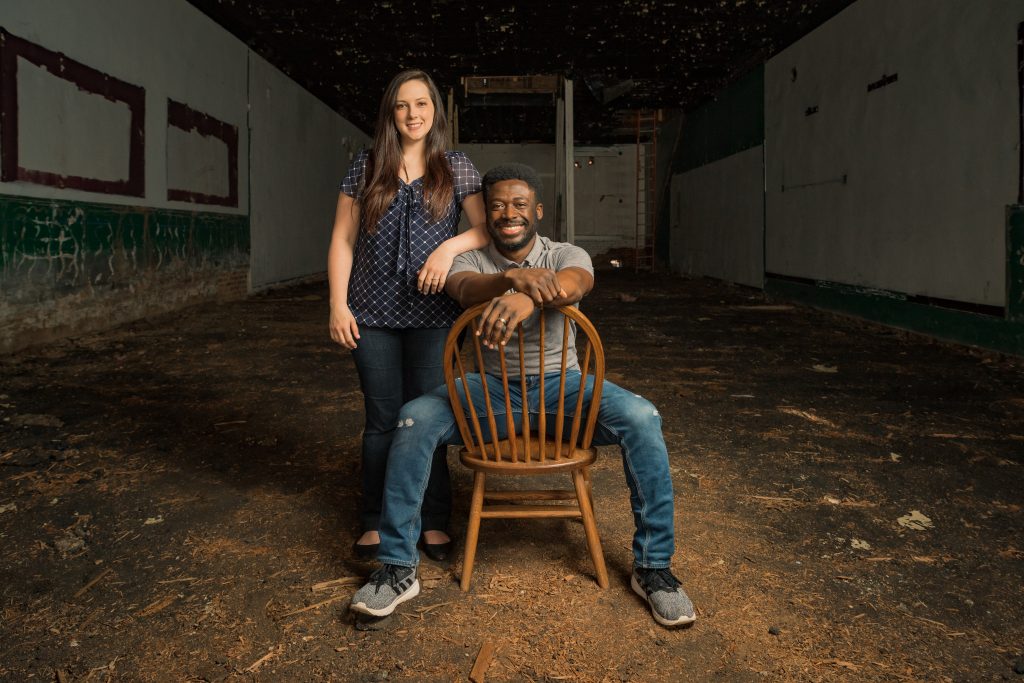 “I remember when I pulled into the Upstate, I said, ‘I want to live here.’”

Val: I remember when I pulled into the Upstate, I said, ‘I want to live here.’ I was meeting my wife’s parents for the first time. We were dating then. She was born in Indiana, but grew up in Greenville. I’m from Cameroon and my family immigrated to Georgia when I was young. Elaine and I met at church in Florida. I was going to school at Daytona Beach and she was visiting her grandparents. When she walked in, I said, ‘God, if you let me date her, I’ll marry her.’ And He heard me.

Elaine: We’ve been married almost eight years now and have three kids. They’re 7, 5, and almost two. We lived awhile in Raleigh, but always wanted to come back. I wanted to be close to family to help with the children, and Greer is becoming this amazing city to raise your kids in. It has that small hometown feel, but also kind of city-like in a way. Everything is close by and there are great schools in the area as well.

Val: We’re very invested in the kid’s education. Our oldest is in public school. Being a mixed family, we wanted diversity for our children. He’s getting a good education and I’m pleased with the pace of learning.

Elaine: We have some of the top schools in the area. They have so much more than when I was in elementary school here. I can see that progression continuing in a good way. As a family, we love the outdoors. Our son is super interested in basketball and will be playing at the YMCA this fall. Our daughter loves ballet. She came home from school and asked to pull up ballet YouTube videos. She’s started taking lessons and hasn’t stopped since.

Val: One of the things that drives our family: we’re not people to just stand by and watch. We’re one to contribute to the community and control the environment our kids will grow up into. That has been a driving force for us and we wanted to be involved in business somehow. Elaine: Val had worked in software, and I’d worked multi-family housing and done some franchising with LuLaRoe. We liked the idea of a food hall and reached out to a close friend to talk about the concept about a year ago. He said he had the perfect spot for us.

Val: When we walked into 215 Trade Street, it was screaming ‘food hall!’ That’s essentially how Cartwright Food Hall was formed. We have a great team. Our business partners, Ben and Caroline Godwin, are basically the opposite side of the same coin. We balance each other out. We are two driven families. We’ve hit the ground running, with no time to waste.

Elaine: To be in the heart of downtown is unimaginable! The Food Hall is 7,000 square feet. With the help of the Greer Heritage Museum, we found records on the history of our building dating back to 1865. It used to be a horse carriage dealership. That’s how we came up with the name Cartwright. That’s a person who fixes carriages.

Val: This is the first food hall opened from scratch in Greer. We’ve started renovation, but we’re already working with our food vendors for Dine on Trade. It’s walkable and interactive. It’s a sight to see families walk up and down Trade Street under the twinkling lights, sampling all this great food. We’re on track for the Food Hall to open this summer. I’m really excited. I’m an immigrant, surrounded by guys who invested in me. They didn’t see color. They didn’t see a black guy. They saw a young man who’s driven and said, ‘Let’s do it.’

Elaine: I look at it as a way for us to contribute to Greer and help with revitalization, and be a place where families can come and hang out in a safe environment. And for our children to see the hard work we’re putting in? Hopefully that will be an inspiration for them to do something of their own someday. Val: We are Christians and hold our faith near and dear. We’re still a young family. Right now, we’re getting direction on how God is leading us. God made everything come together for Cartwright. We don’t believe in forcing things. As for the future? We’re thrilled to be a part of Greer’s growth. With His will, we see our future in Greer, or Greer-based as we move forward.